UHV Pumping/Heating System (Ultra high vacuum)
Mechanical and electrical engineering, software with complete traceability of the process (temperature and vacuum). Generation of reports stored in a database, with the option to export them to CSV files.

Transfer machine with robot and vision
Electrical and software work. The robot takes the parts on the feeder using vision system. It then rotates them precisely (the correction is measured using the vision system) before fitting them on the rotating table. 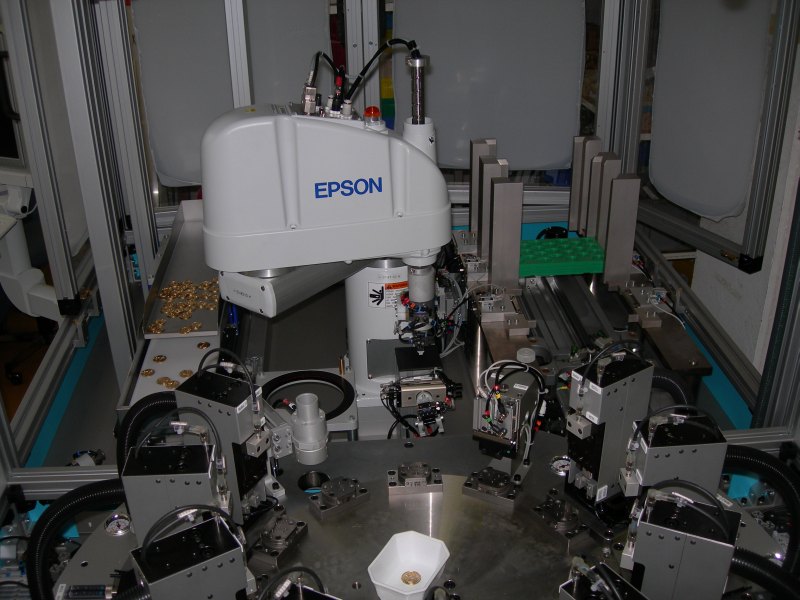 Palletizer for watchmaking
Mechanical study, wiring, software well as the commisionning of several palletizers for the watching industry.

Mechatronic's Project with SIMOTION:
Implementation of a complex mechatronic system with the SIMOTION technology of Siemens (using the software "SIMOTION Scout").

Assembly machine for components of watches
Electrical and software realization for an assembly machine for componets of watches. This machine is composed of a "Servo-press" and a cross table X-Y.
Each components which are assembled, the strenght [N] and the position [mm] are saved in a database. Management of the "product's order" and a backup of the part's programs are made.

Electroforming machine
Wiring diagram and hardware's choice. In this project, we needed to integrate a Mettler Toledo balance with Profibus DP interface. Integration of the deposition algorithm, to obtain a final efficiency according to the orders entered per the operator. Printing a report on an industrial printer.

Traceability of a process using the Radio Frequency Identification (RFID)
Implementation of the traceability onto the production machine, using a PLC MODICON.

Industrial cleaning machine
Assembly, wiring and testing the electrical cabinet of these machines.

Storage and Destockage for a medical laboratory
Realization of the electrical part and software for a robot which manage the storage and destockage of medication.

Assembly machine for the watchmaking.
Realization of the electrical part, software and the mechanical assembly.

Cold rolling mill 100kW
Study and realization of the electrical wiring diagram. Mounting and wiring the electrical cabinet. Implementation of the software including the thickness control loop. Commisioning at the customer by ourselves.

Automatic feeding of labels
Project management for mechanical and electrical implementation of the machine. Study and realization of the electrical wiring diagram. Mounting and wiring the electrical cabinet, and wiring the machine. Pneumatic and mechanical assembly. Realizstion of the software including the control loo for a servo-motor and the Human-Machine-Interface. Alarms management. Commisioning at the customer by ourselves. Training of the operators ant the maintance team.

Network of Product distribution
Realization of the electrical part and integration of the software for a liquid transportation network, with traceability.

Various machines for radiator manufacturing
Realization of the electrical part and integration of the software for darious Machines for the assembling of the radiators.